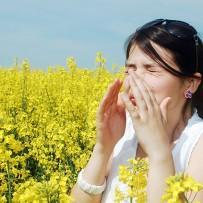 Allergic rhinitis is a collection of symptoms, mostly in the nose and eyes, which occur when you breathe in something you are allergic to, such as dust, animal dander, mold or pollen.

The signs and symptoms of airborne allergies include: